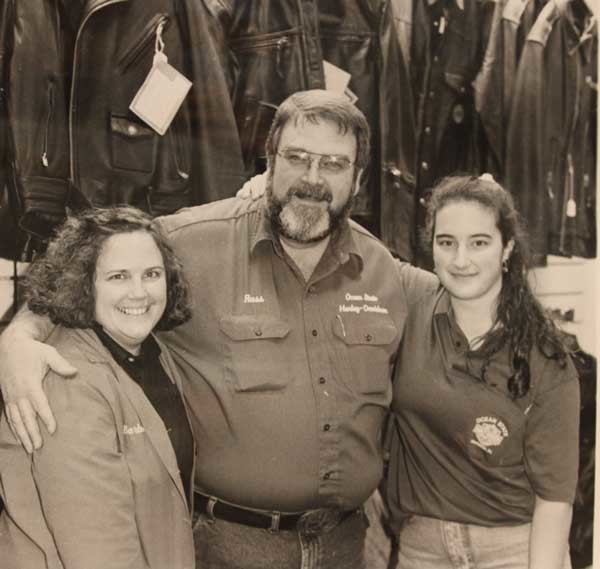 Russ Hampton had spent years working for the telephone company. His wife, Barbara (also a telephone company employee) noticed that once a week, Russ would by a lottery ticket. When she asked what he would do if he won, Russ replied that he would like to open his own business. His choices were a White Castle Hamburger franchise or a Harley-Davidson® dealership.

At the same time their daughter Amy was growing up. Not wanting Amy to be a latchkey kid, Russ and Barbara decided that owning a business would allow them to take their daughter to work. White Castle Hamburgers was not looking to expand into New England. Harley-Davidson, however, had three locations available: North Carolina, Colorado, and Rhode Island. It was decided that Barbara would keep her job with the phone company so Russ and Amy could work the dealership (and so they could afford their new hobby). So, a Harley dealership it was! To this day Russ and Barbara joke that if they had put the money it took to start a dealership into Harley stock, it would have been worth more than the dealership is today: “Right idea, wrong execution!” they like to say. 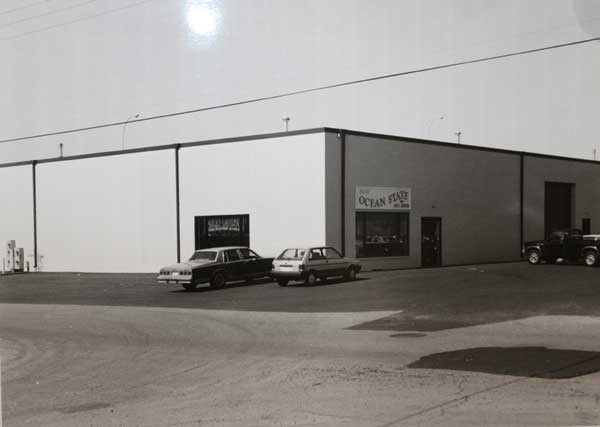 The original dealership on Alhambra Road.

Ocean State Harley-Davidson®, Inc. first opened it’s doors in 1988 on Alhambra Road in Warwick (Right Next to T.F. Green Airport). In the beginning, nine year old Amy ran the parts department. Rhode Island, lacking a Harley dealer for some time turned out to be a market starved for Harley-Davidson products. The initial allocation of thirty motorcycles sold quickly and almost immediately, there was a waiting list for new models. 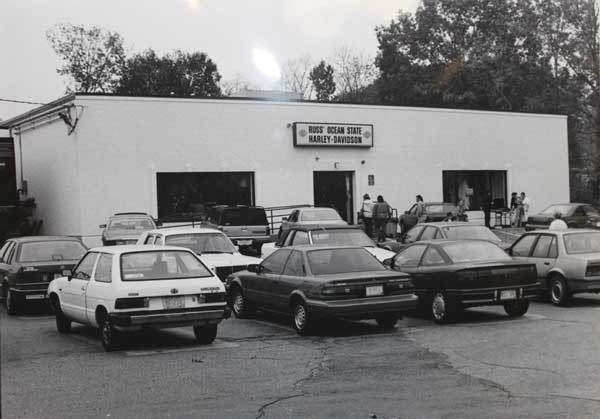 The Albany Road location.  Just after opening in 1993. 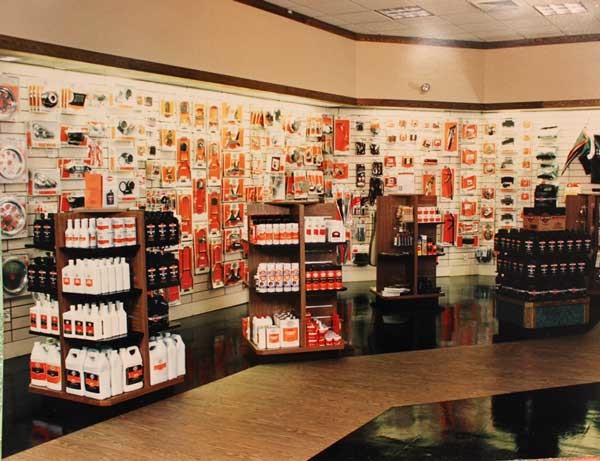 The Albany Road location just after opening.  Look at that Packaging! 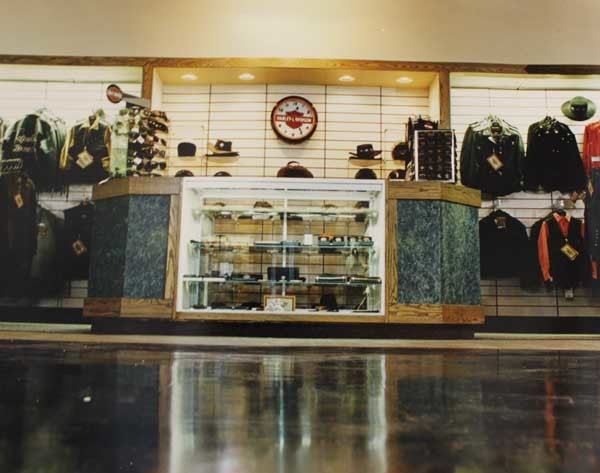 Long before it was the Chrome Consulting Counter.  It was the Motorclothes Counter in 1993. 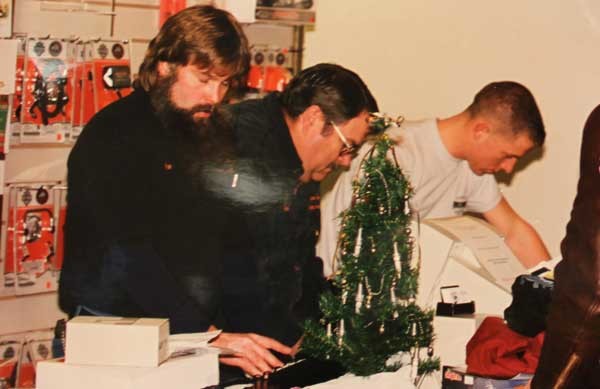 Ocean State quickly outgrew its first location and in October of 1993 the dealership was moved to its second location (5 Albany Rd.) in Warwick. Over the next several years Ocean State and the local Harley-Davidson community grew at an amazing rate. In need of space, Ocean State opened a warehouse building a block from the dealership to store and set up new motorcycles. In 2001 the service department moved into the building next door to the dealership. This allowed for a doubling of the size of the showroom and moving the parts area downstairs (the upstairs mezzanine was a great place to hit one’s head!). At the same time the H.O.G.® lounge was enlarged to accommodate the growing Ocean State Chapter Harley Owners Group®. Motorcycle sales were really roaring by this point with a two year waiting list for a new model! Even in the days of major price markups around the country, Ocean State was one of the only dealerships to never mark up the price of it’s bikes over MSRP. This made Ocean State a popular place to buy a bike, even by people who lived far away and passed several dealers to get to Warwick. 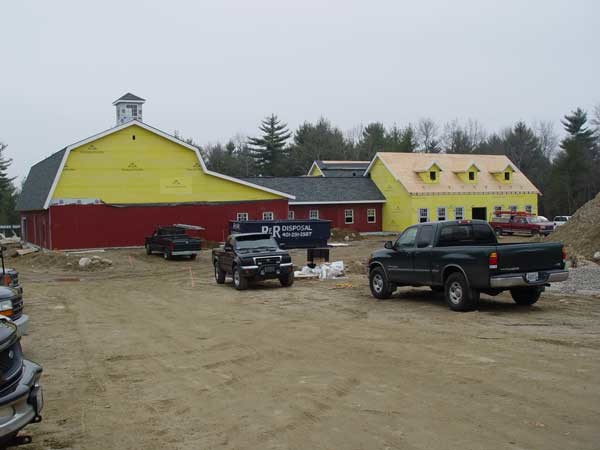 Construction at the Exeter Location in early 2004

In 2003, as the Motor Company kicked off it’s 100th anniversary celebration in Milwaukee, ground was broken on a Secondary Retail Location in Exeter, RI. The new facility, created to be a destination for bikers was built at the intersection of some of Rhode Island’s best motorcycle roads. Opened in 2004, Ocean State Harley-Davidson® Shop in Exeter was much smaller in square footage than it’s big brother in Warwick. It was an instant success, giving customers an alternative to traveling into the “city”.

Like many American manufacturing companies, Artistic Laces, across the street from the Warwick store, closed it’s doors in 2005. Ocean State acquired the location at the same time and consolidated it’s service department and warehouse facilities into this one building. Additional office space and a Winter storage area were also added at this time. As 2005 turned to 2006, Harley-Davidson dealers were finding themselves with something they had not had in a long time: Inventory! The Artistic Laces building turned out to be a great place to keep unsold motorcycles, and new customers were often escorted “across the street” to see what’s just come in from the Motor Company. 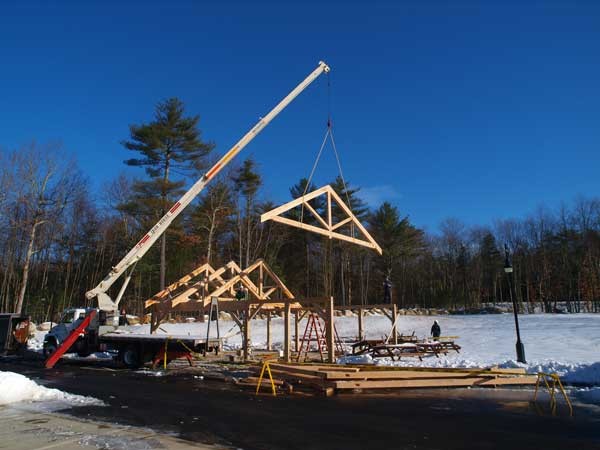 The picnic pavilion being raised in Exeter on one VERY cold January day.

Over the Winter of 2006-2007 a timber frame picnic pavilion was raised in Exeter, completing the project three and one half years after construction began. Upon completion the Town of Exeter planning department awarded Ocean State with the town Planning award.

In 2013 Ocean State Harley-Davidson Celebrated 25 years of business in the Ocean State. 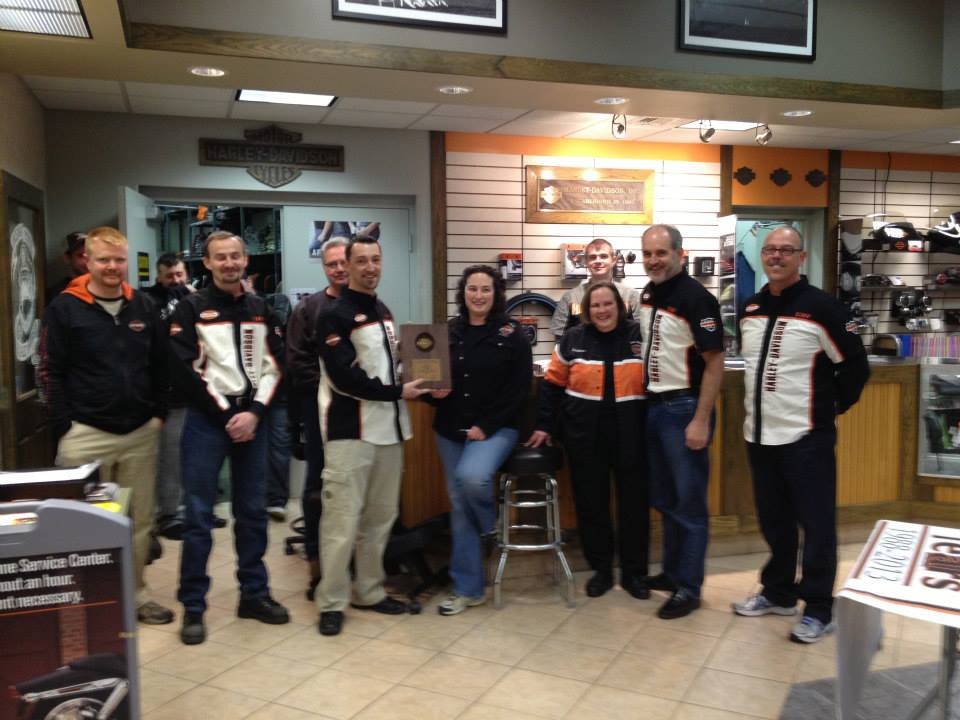 The Motor Company brass came by to present the 25th Anniversary Award. 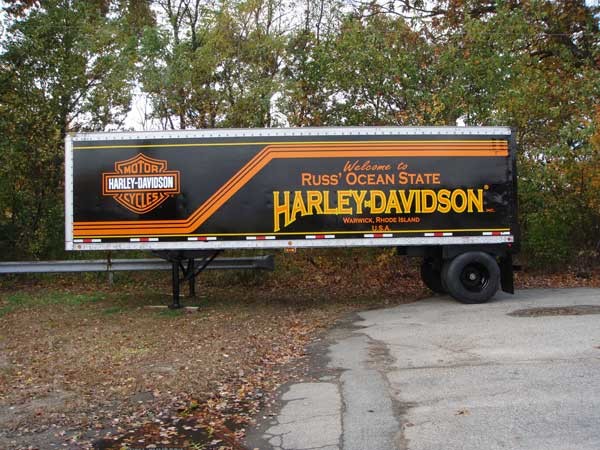 The Warwick mail trailer, painted like the old motorcycle delivery trucks, is a popular photo backdrop for travelers. 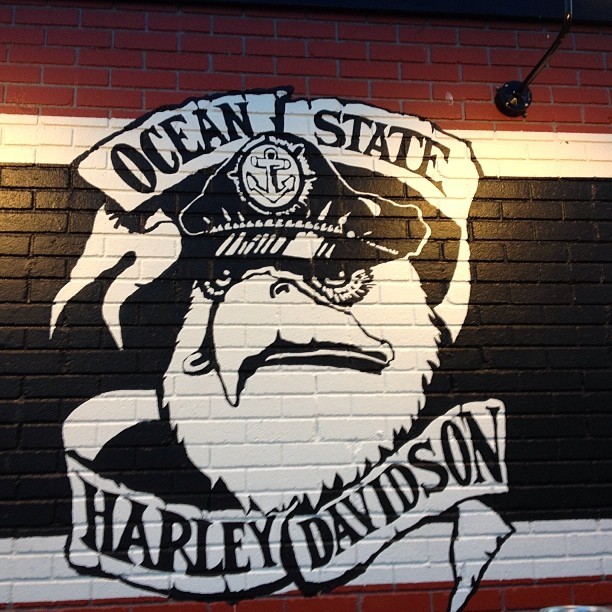 In 2014 the Exeter store celebrated 10 years of service to the Ocean State motorcycling community and continues to be a popular meeting point for groups, rides, runs, and rallies in New England.

Ocean State Chapter H.O.G. stops for a photo in front of the Exeter Store. 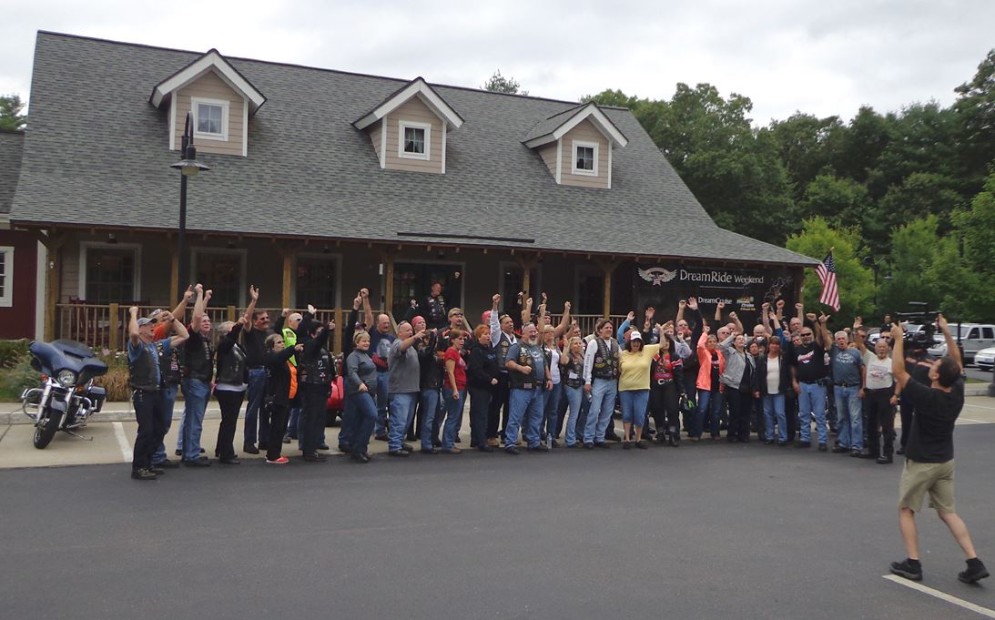 The Dream Ride takes a photo before leaving the Exeter store.

In 2016 Ocean State Harley-Davidson began the next major chapter as it opened it’s new store in Warwick converting the old Artistic Laces mill across the street into it’s new retail home location.  Again with all services under one (big) roof, Ocean State is ready to meet the needs of the modern Harley-Davidson enthusiast. 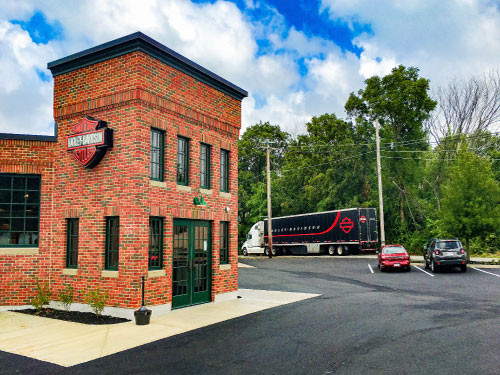 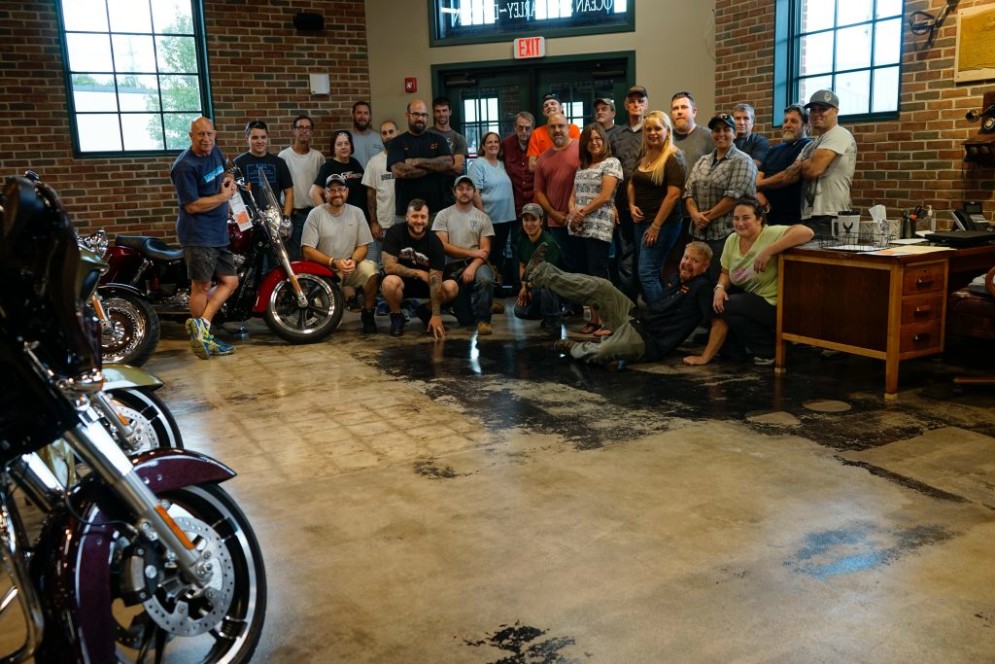 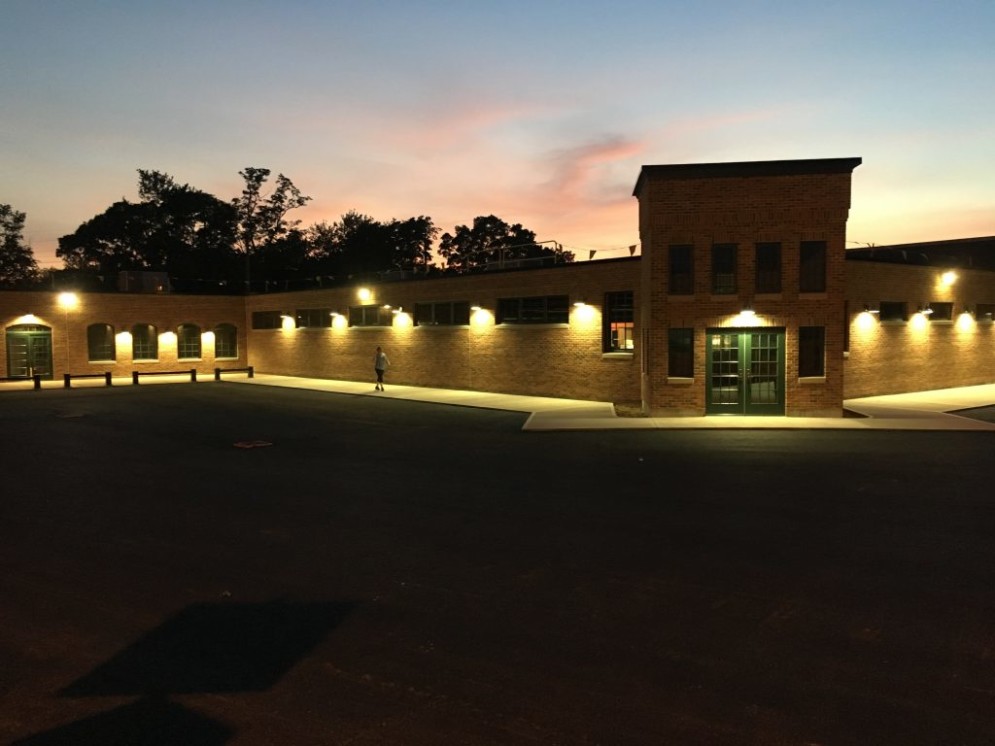 Images of the new Warwick Store.

After opening the new Warwick store in 2016, we won the Gold Bar and Shield Award for exceptional customer service in 2017.  In 2018 we celebrated 30 years of business.  In 2019 the Exeter store celebrated 15 years of business.  Also in 2019 we won the Providence Journal Reader's Choice Award for Best Motorcycle Dealership.  We were so honored to be recognized by our local family of Harley-Davidson enthusiasts.

Today, Ocean State Harley-Davidson continues to serve customers from around RI and with the T.F. Greene airport now being international we have new friends from around the world. While recent years have not been without challenges, Ocean State continues to pride itself on it’s friendly customer service and “down-home” values. Our “family” of customers, employees, and friends transcends all walks of life.  Come by and say “hi”, grab a cup of coffee, and see what difference a small, family-run business can make. 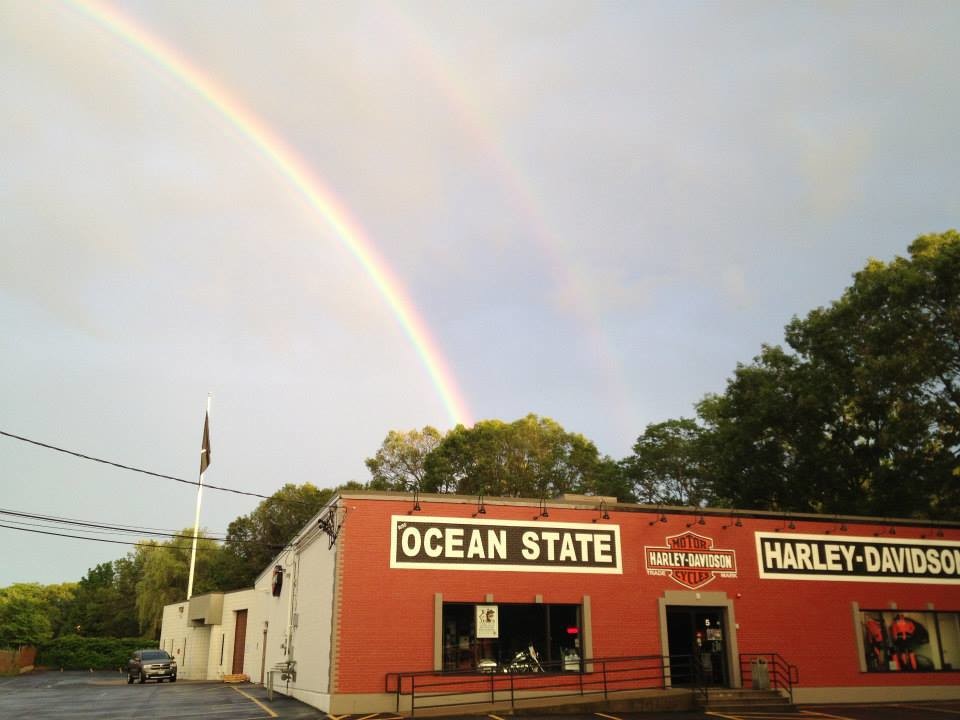 The Old Warwick store, our home for over 20 years, as it looked when we moved across the street.